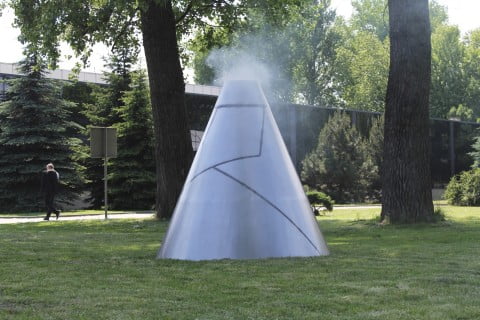 Nowa Huta is a perfect location to watch how the operation and the role of culture institutions have changed over the last few decades. Once a flagship project of the People’s Republic of Poland, filled with generously subsidized culture houses, for mire than two decades have awaited its new formula (not only in the field of culture, by the way). In other words, Nowa Huta, like many other city districts in Poland after 1989, is still looking for its own way of passing from culture relying on public funding to the grant model, in which seeking private funding is of equal importance.

The case of the Nowa Huta Cultural Centre (NCK) is interesting in this respect. The building is an eclectic hotchpotch, designed in the 1960s, based on the then Soviet Kiev model, built throughout the 1970s, living its best years in the 1980s, chaotically renovated in the 1990s, and with a new wing added in the last decade. All these periods have left their stylistic mark on it, reflecting Poland’s political and economic path from the centrally planned economy to turbo-capitalism.

The project Instructors’ room consists of a few interventions in the public space, referring to former and present strategies created by many people employed at culture houses, educational centres and similar institutions. Culture and education instructors, once called “KOs” in Poland, are now rather referred to as culture animators. They are surely good-hearted and well-intended people. But no matter if in the times of the Polish People’s Republic or now, their activity is not necessarily that harmless. Whether they want it or not, the specificity of the institution’s operation (currently this also refers to NGOs), in which they work, sets the meetings, events, special interest circles and in the context of the cultural policies devised by authorities at various levels. Instructors and animators bravely meander between government programmes, EU priorities and grants, trying “to change something”. But, in the end, it is not for them to decide to whom the money comes.

The project Instructors’ room, orbiting around two utterly different Nowa Huta’s culture-related places – Kombinator/Łaźnia Nowa Theatre and NCK – deals with the strategies used by instructors: a concert here, a guided tour there, education through model presentations etc. Interestingly, the border between artistic and strictly animator’s activity is rather blurred. Where does art end and animation/instruction begin under the project? It’s hard to set a clear border. Perhaps the artist is indeed an instructor or animator, only a little different from the one who works at a culture house. All the more so, that both are deeply immersed in the meanders of cultural policy.