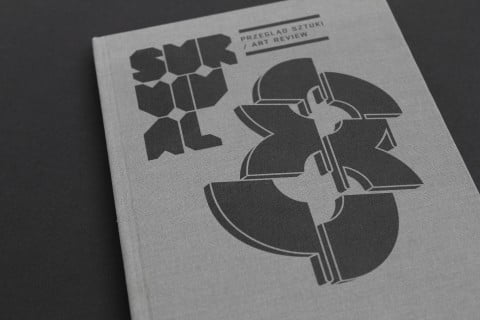 The praise of ornament, a study of passing time or a formal play in a process of creating a sculpture made from bitumen? All of it in part. Michał Smandek, a sophisticated aesthete, this time found pleasure in shaping an ordinary material, although not devoid of sensuality. Smandek created an expert illusion of a mechanism which spontaneously secretes an undefined substance. Thick, pitch-black mass, cascading from a glass nozzle, was poured in a curved corridor. Subsequent layers of flowing lava added patches, branches, stretches of hardened matter. This shiny ornament became an obstacle and challenged visitors roaming the corridors. The fundamental question about how to treat this aesthetic, almost jewellery-like object was manifested in discrete attempts of bypassing it. But from the moment of the first intrusion on the surface of the installation there was no going back: the perfect blackness became dusted, the plastic mass received more and more footprints, traces, signs. The monumental object kept its scale but its original beauty was irreversibly lost and, as a deteriorating coat, quickly became part of the landscape of the bunker, which had been filling up with dust for years and had been doomed to progressing entropia.
W ramach naszej witryny stosujemy pliki cookies w celu świadczenia Państwu usług na najwyższym poziomie, w tym w sposób dostosowany do indywidualnych potrzeb. Korzystanie z witryny bez zmiany ustawień dotyczących cookies oznacza, że będą one zamieszczane w Państwa urządzeniu końcowym. Możecie Państwo dokonać w każdym czasie zmiany ustawień dotyczących cookies. Więcej szczegółów w naszej " Polityce Cookies".
Akceptuję
Polityce Cookies