Internet version of the exhibition – www.zycieludzi.kronika.org.pl
Video from the work Enjoying the Abundance (Erasing the Land)

The Spirit of the Hive

Ten thousand years ago, a woman-beekeeper was drawn with a skillful line on the wall of the Araña Cave. She was gathering honey from the wild bees that have been on Earth for over a hundred million years.

Beekeeping practice is a long and careful discipline. The observation of every, even the slightest, relationship between a bee and a swarm, a swarm and a queen, a bee family and environmental conditions indicates a gradation of relationships in nature, of which we constitute just one piece: a species that is a threat to others, becoming more and more numerous, the most expansive, exploiting and destructive to the environment. In view of the widespread problem of bee extinction, running an apiary seems to be beneficial for the survival of the bee specie. However, it also poses a question whether the predominance of honeybees would not interfere with biodiversity among other pollinating insects. It must be said with honesty that human interference in the lives of bees has always been driven by profit. The intentions are clearly manifested even by the terms “bee farming” or “honey harvesting”. In order to think ecologically, one should remember about the balance between the wellbeing of bees and the wellbeing of humans which depends on the ethics of the beekeeper. It should result not so much from empathy for the living creatures, as it may seem, but also from current scientific knowledge regarding the threats to the existence of pollinating insects, without which we will become extinct.

Maurice Maeterlinck wrote: “All things go to prove that it is not the queen, but the spirit of the hive, that decides on the swarm. With this queen of ours it happens as with many a chief among men, who though he appear to give orders, is himself obliged to obey commands far more mysterious, far more inexplicable, than those he issues to his subordinates.” Do we humans listen to such spirit?

I was examining the formations of the capped cells in a mature honeycomb and I came to the realization that the way nature communicates is still incomprehensible to is. We claim the right to assess intelligence and attribute the highest one to ourselves, downplaying other species, even though we barely know them. If the spirit of the hive tells the bees to leave an abundant nest, contrary to human logic, in order to preserve the species, do we, humans hear anything? Are we deaf to this mournful moan of dying nature?

Negotiating the shape of the maps with the bee colonies was arduous. After all, humans and bees do not have a common language. Of course, it was also empirically interesting. The idea to manually recreate the maps seemed crazy. Well. Initially quite dissatisfied with the effects of the work, I took the frame to be adjusted: placed it in a row of others honeycombs in the beehive, and waited. The revision process conducted by the bees turned out to be ruthless. The shape I applied was erased, razed to the ground, the comb was cleared of any deceptive human manipulation. Ultimately, the cells of the honeycomb that I had capped were empty. You need to know that the capping of a cell takes place only when the collected nectar is subjected to the chemical processes of various enzymes and becomes honey containing the appropriate level of water, which is evaporated by the bees increasing the temperature in the hive. Honey is a hygroscopic substance and a tight, air-tight capping prevents the honey from re-absorbing water. This is how prophetic cartography comes into being, a shape of the land on the bees’ map.

I left the upper part of the hive empty, just decked with a cover. The bees built honeycombs in it accordance with their own architectural design and intent. The elliptical shapes that climb downwards are formed from the exuded wax, and they are built in a very particular way: a dangling cluster of worker bees, facing upwards, freezes and exudes the wax motionless in the form of tiny plates, which then becomes a nest building material when chewed with bees’ mandibles. The wax producing bees build the center wall along which they coordinate work with others. The further the ledge of the honeycomb is extended, the more the cells at the top are deepened and strengthened. Turning the lid upside down to better observe the natural process of construction, I thought of the Araña Cave beekeeper woman watching the wild swarm, guided by the spirit of the hive, freely building its own city. 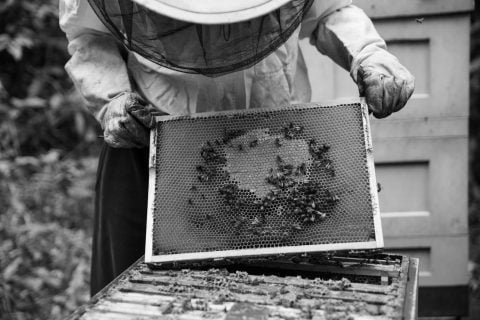 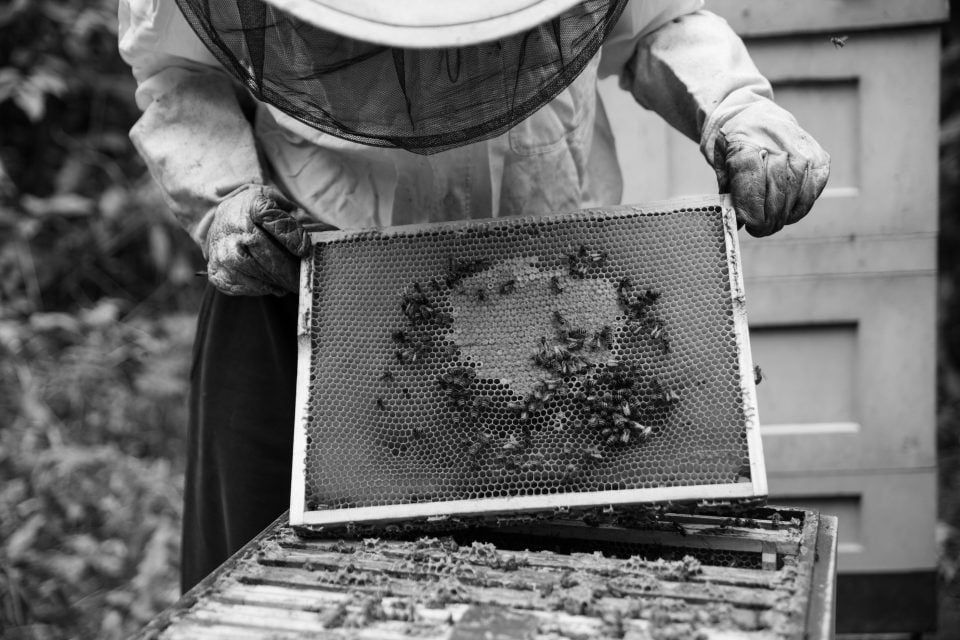 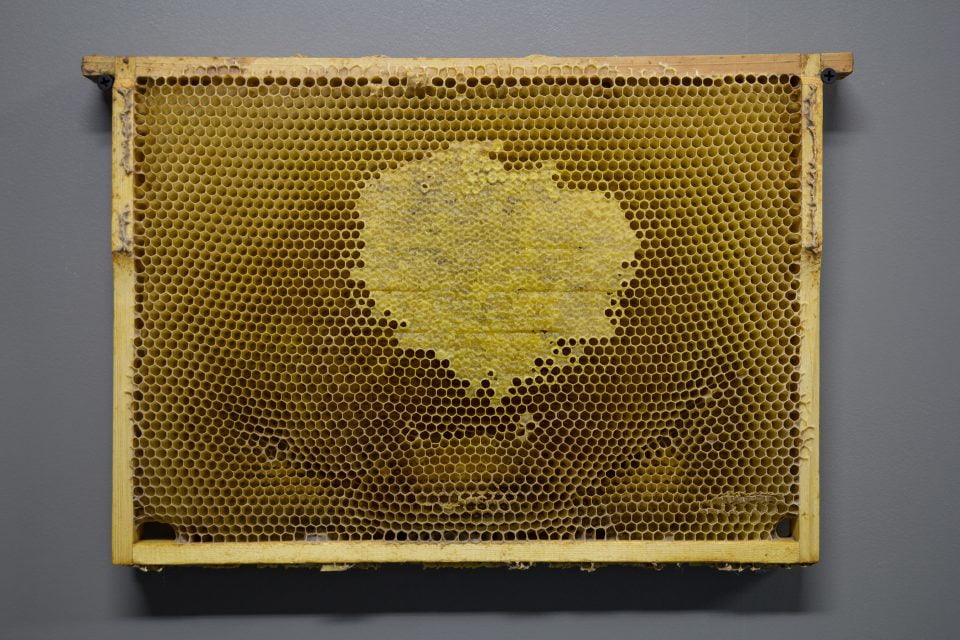 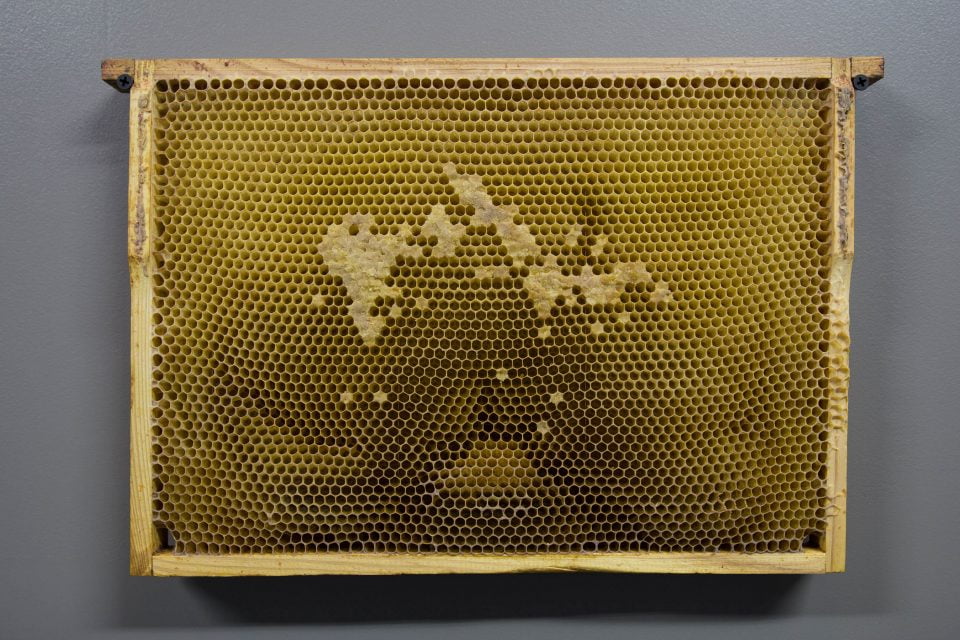 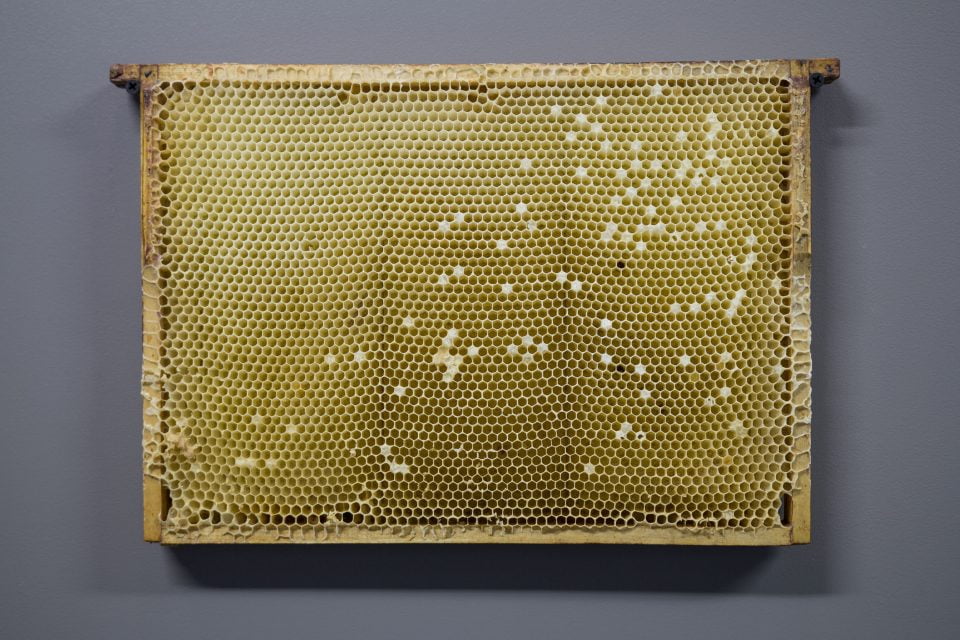 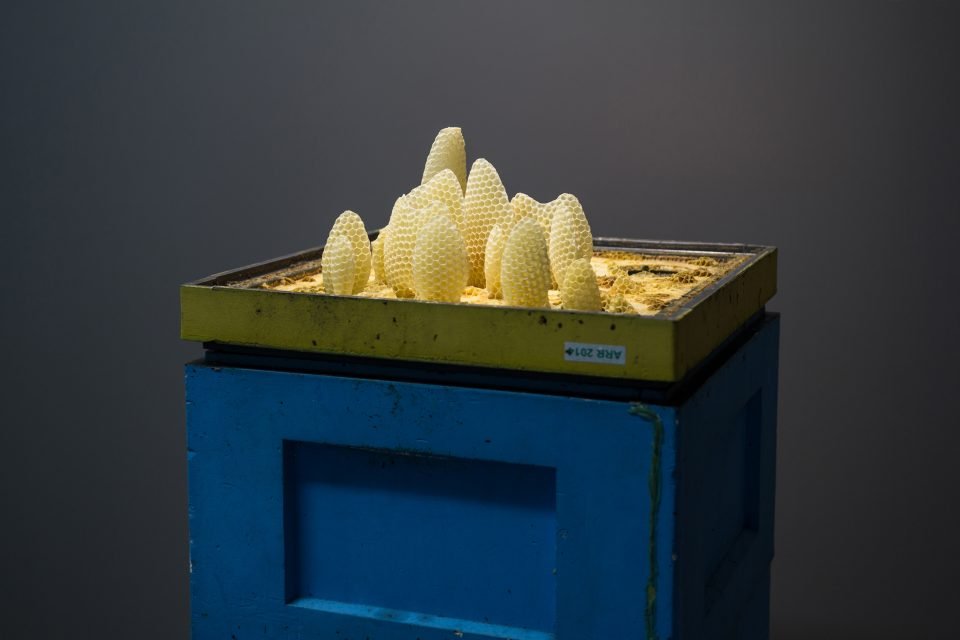 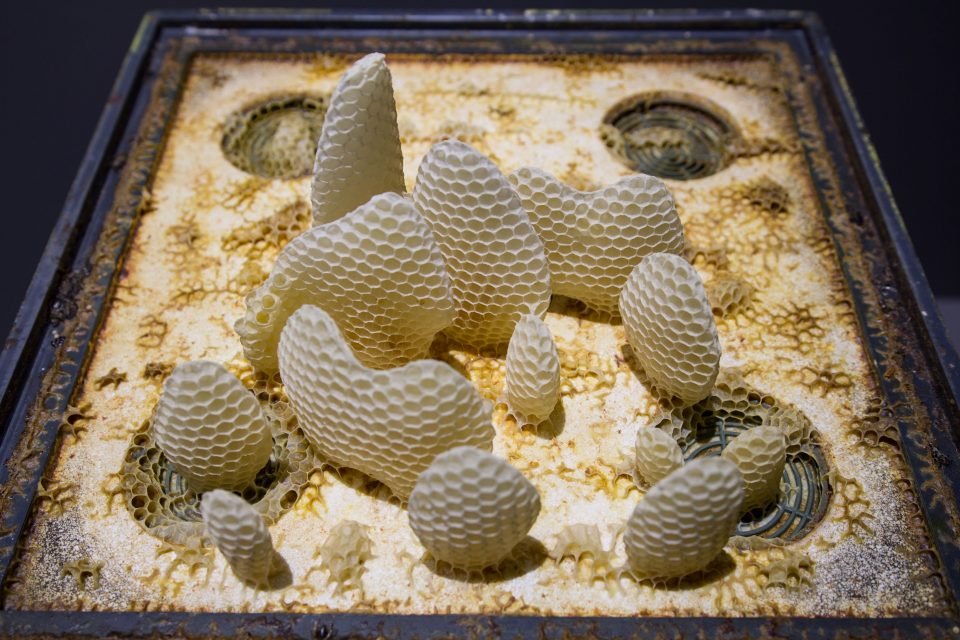 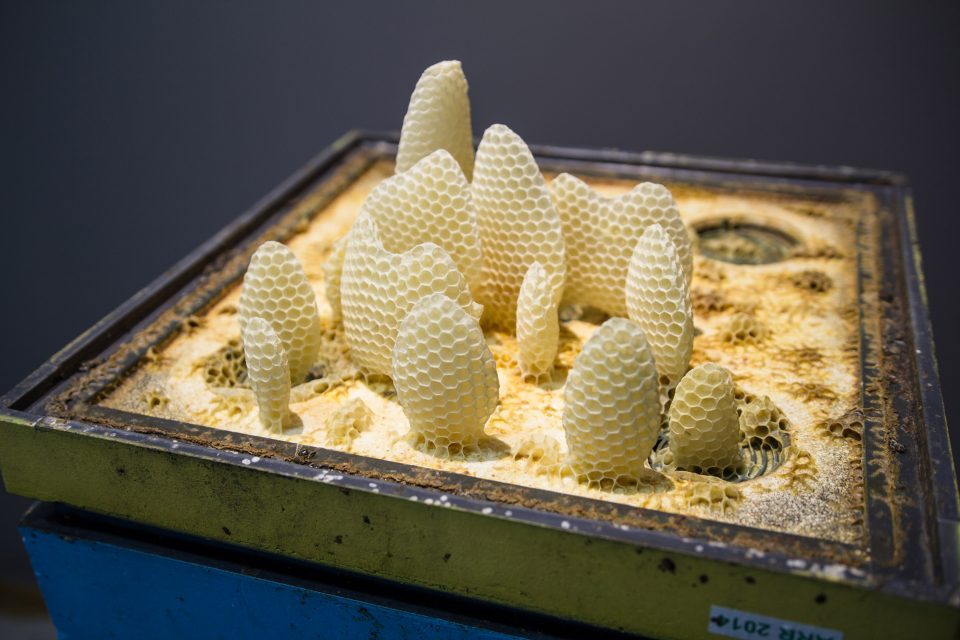 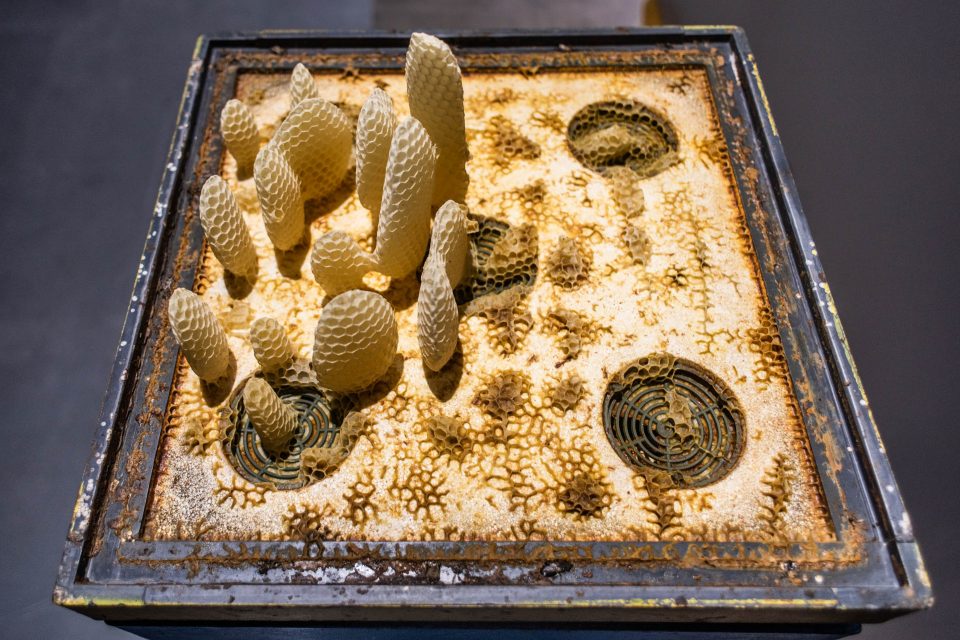 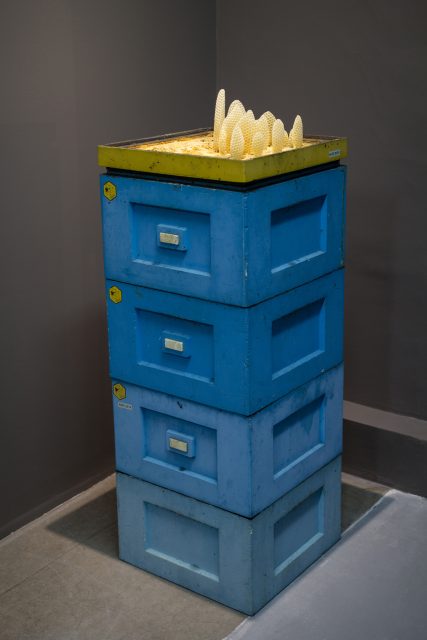 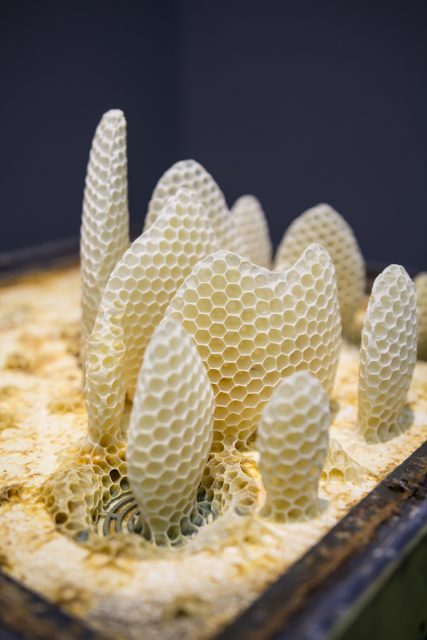 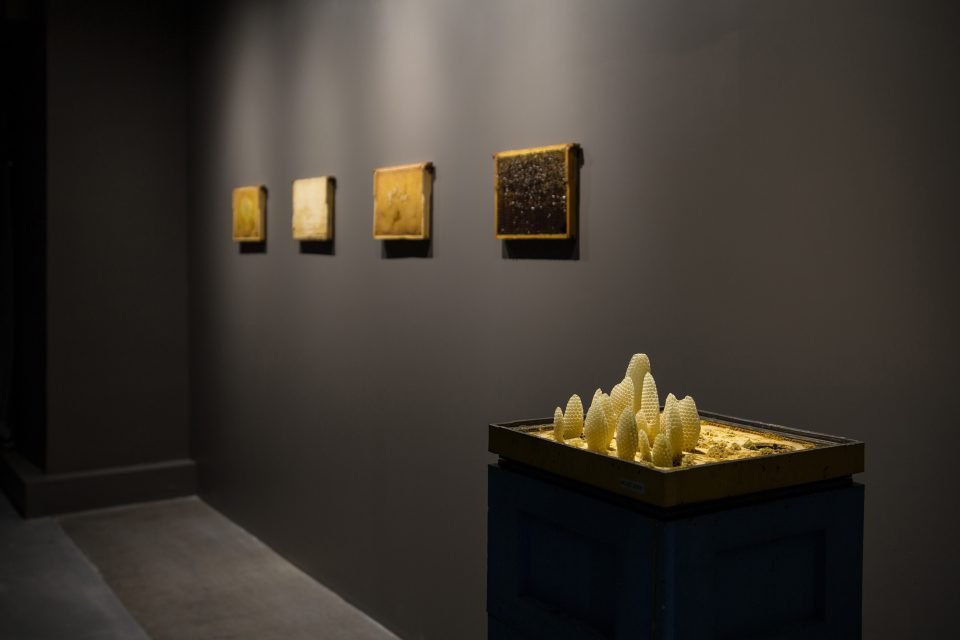 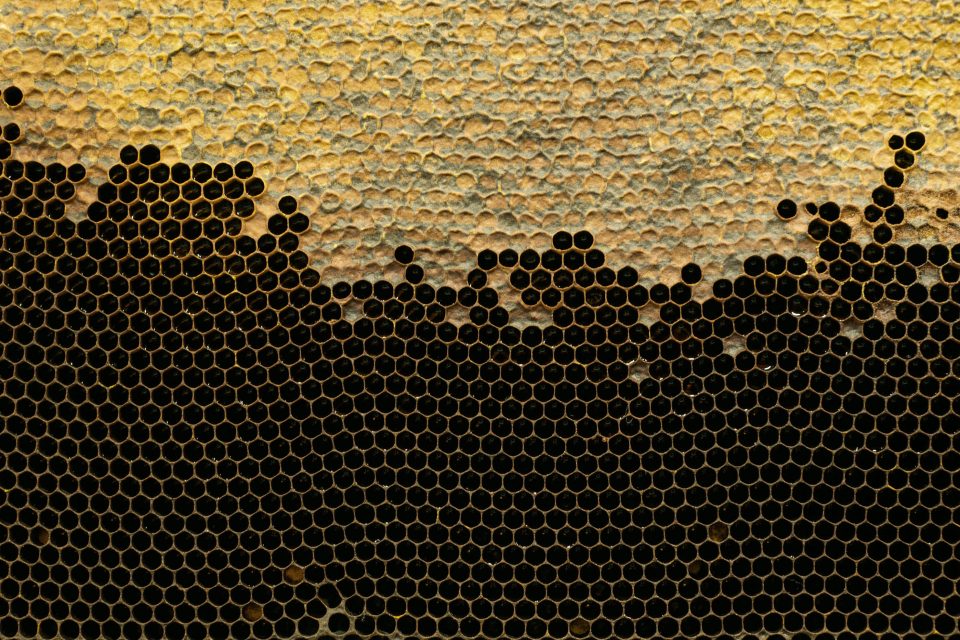 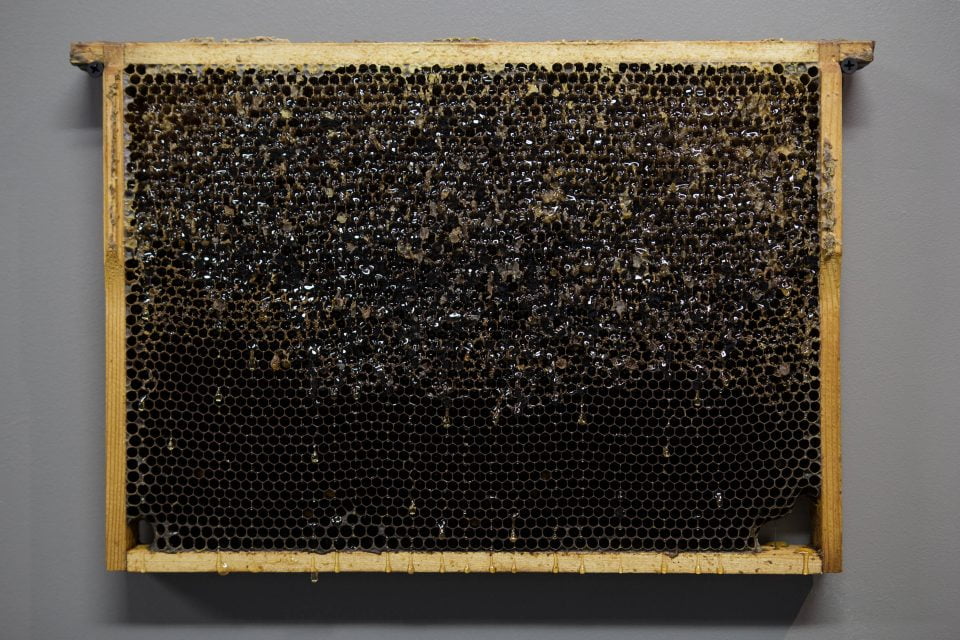 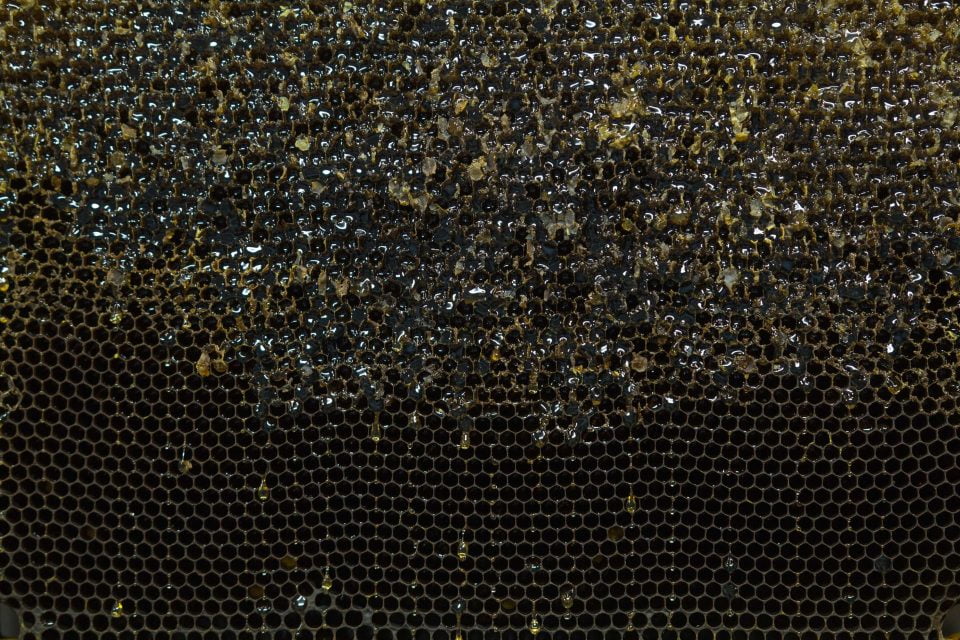 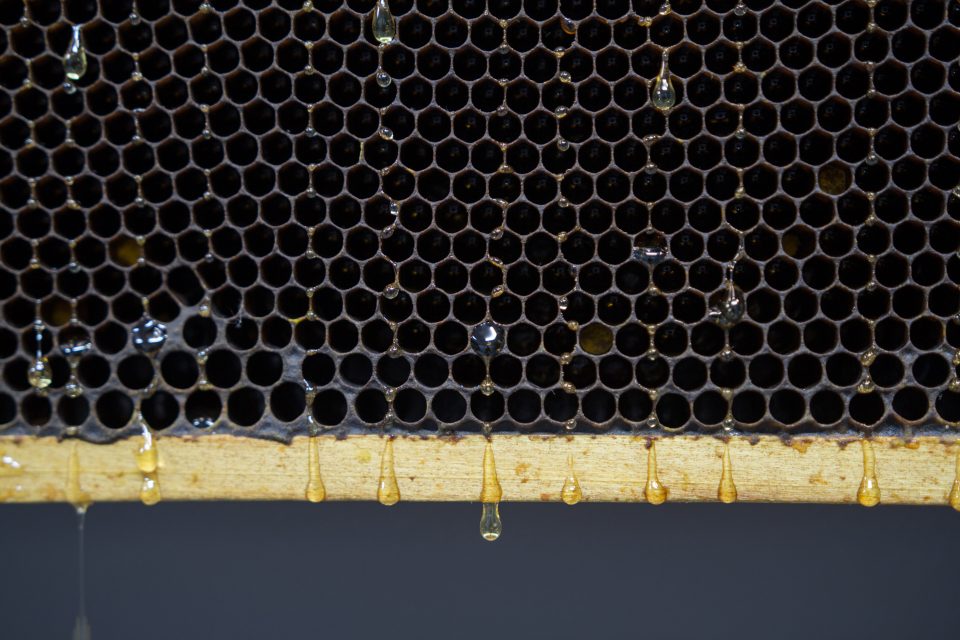 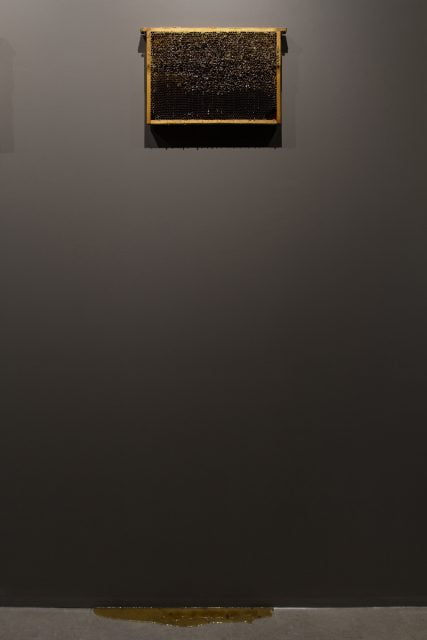 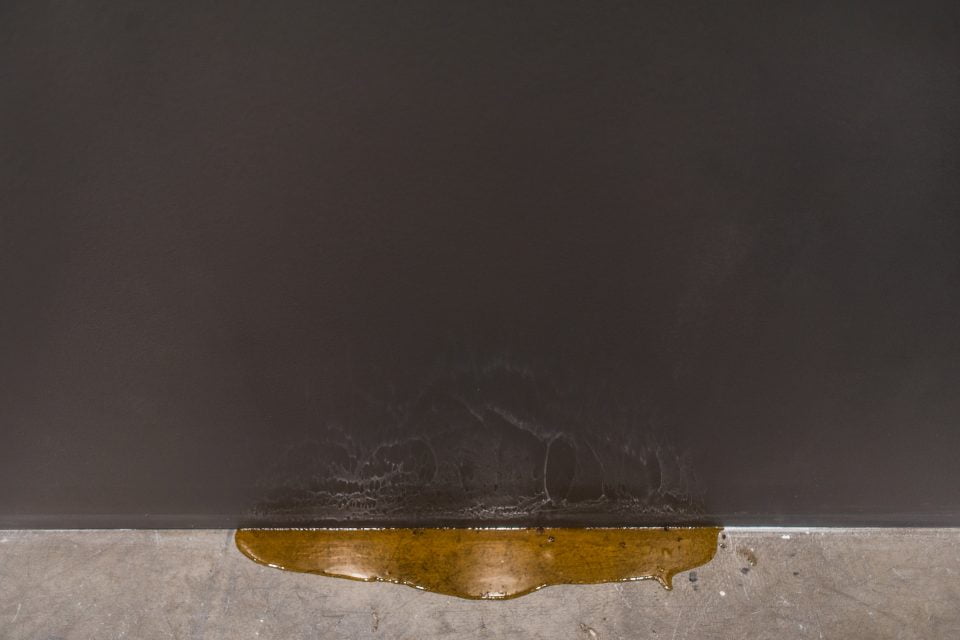 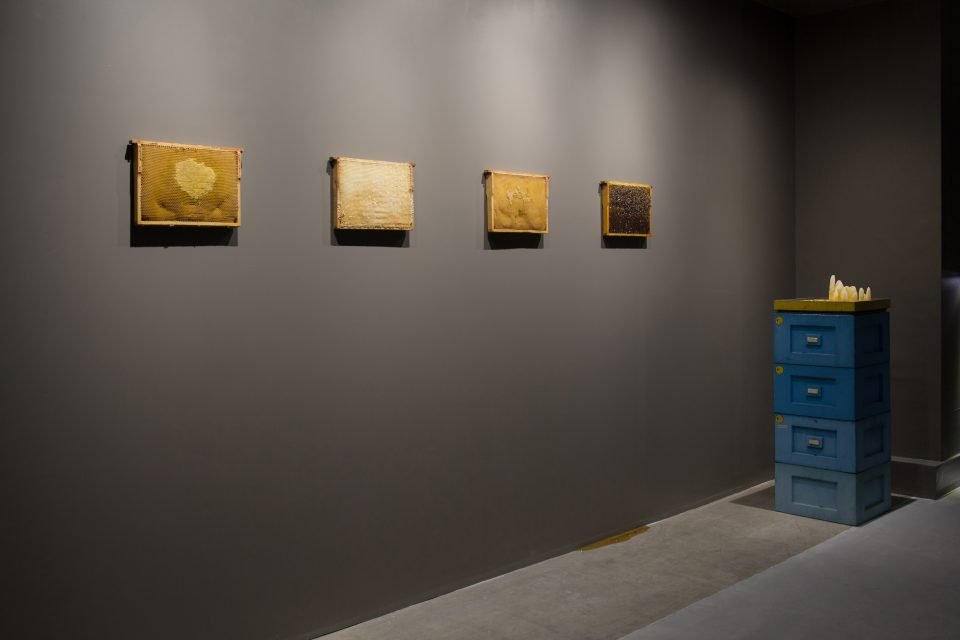